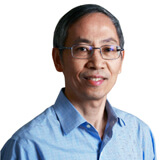 
Since the introduction of the film and other media tax credits in 1995/1996, Jimmy has been involved with over 500 film, television and new media productions. He has been assisting film and television producers with budgeting, financing, cash flow management, business affairs, liaison with CAVCO and OMDC, audit of production cost reports and the claiming of these federal and provincial film tax credits.


Jimmy is a graduate of Tsinghua University (China) with a BASC in Engineering. Subsequently, he immigrated to Canada in 1989 and continued his studies by completing his MBA from the University of Toronto. He received his Certified General Accountant (CGA) designation in 1993 and qualified as a Chartered Professional Accountant (CPA, CA) in 1998. Jimmy became a Certified Financial Planner (CFP) in 2000.

< Back to Our Team